I don’t believe BBC’s Sherlock series has been brought up in the Library before, but I’m not going to go full SC Wiki. Since this is a short fic, I’ll do more of a lazy, Taco-style, Need To Know Pamphlet and throw in relevant details as needed.

First off, Sherlock Holmes is a fictional British detective created by Sir Arthur Conan Doyle in a series of mostly short stories that were written and set in the late 1800’s/early 1900’s. Told through the voice of his assistant, Dr. John Watson, they show Sherlock as a master of logical reasoning, forensic science, and observation during investigations for various clients as well as Scotland Yard.

There have been bajillions of literary, film, and television adaptations featuring the characters, the latest of which is the BBC television series, Sherlock. In this version, some of the original stories are adapted and set in modern day London.

This fic was written and posted just four days after the Season 1 finale, “The Great Game”, aired in 2010 with an update the next day.

Now let’s take a look at the summary.

my view what happens after the episode ‘Great Game’ ends… angst because im like that. sorry if i spell Moriarty’s name wrong… i have no idea how to spell it haha

Terrible grammar, missing and misused punctuation, and topped off with a dose of too-lazy-to-Google-ness? This looks promising.

END_OF_DOCUMENT_TOKEN_TO_BE_REPLACED

-WARNING(?)-
Today’s riff touches on issues relating to the regulation and use of weapons of mass destruction. This is partially a fairly standard flamebait warning because I am aware the topic could become contentious (see Call of Duty, Black Hell Ops, previously), but is also somewhat unusual in that I am willing to discuss the topic in more detail in the comments- there just wasn’t room, or relevancy for it in the riff proper.

Hello hello all you patrons, and welcome back to Mass Effect: The First War.

Last time, the turians finally got their bony asses in gear and bombed New York, by firing at some kind of human ship in orbit and missing. This resulted in the usual screeching from the OUTRAAAAGE!!!! Society, and… that was about it.

Oh yeah, and then, like literally tens of thousands of those dreadful SPARTAN knockoffs finally arrived. I can only imagine the cerulean carnage they‘re going to wreak on the unfortunate turians, assuming they ever actually get around to landing. 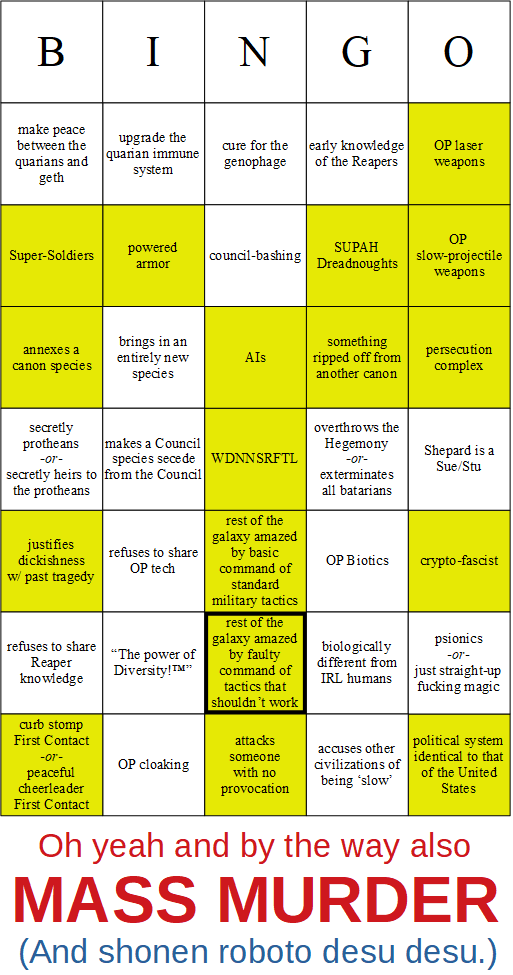 END_OF_DOCUMENT_TOKEN_TO_BE_REPLACED

Hello, patrons!  Welcome back to the continuing Spooptoberfestivities!  Today we’ll be adding two more little oneshots to the Library’s pile of spooky, spooky failure.  The first is a Halloween oneshot, not just the holiday, but also the titular movie taking place on the holiday!  Though, honestly, to call this thing a fanfic is tarnishing the good name of such epic masterpieces of “untold zombie chronicels.”

You’ll understand why this one is bad pretty much right away when I show you the summary.

That’s the entire summary.  And it’s a tragedy/angst fic, so who wants to bet we get something with either My Chemical Romance or Evanescence.  Brace yourselves, patrons, we’re going in hot!

END_OF_DOCUMENT_TOKEN_TO_BE_REPLACED

A Rose by Any Other Name

Hello once again, patrons! I’m your host, BatJamags, and I’m back with more of The Red Queen.

Last time, Ruby angsted about some fucking bullshit that pissed me off. Then she got chosen for a SUEPER SPESHUL MEGA TOURNAMENT. And that’s about it. God, I hate this author’s rambling.

Being summoned by Ozpin, Ruby walked slowly from her spot in the back. Jaune, hoping to encourage her even a little bit, rested his hand on her shoulder. “You deserve this, Ruby.” He said as kindly as he could. Still, nothing could hope to quell the uneasiness in the pits of her tiny stomach. Ruby walked along the aisle, her classmates and all with their eyes on her. She could feel jealousy from all of them, their emotions poorly disguised and their hatred thinly veiled. Nearing the front, she saw her teammates showing her supporting smiles, Yang especially. She had to look forward, but looking forward means we often miss what’s going on around us. Including the dark expressions cast over Weiss and Blake’s faces.

It’s just all so contrived. And contradictory. Were Ruby’s teammates (implying at least two of them) giving her supporting smiles, or did Weiss and Blake have dark expressions?

On the stage, Ozpin addressed the four about the responsibility now given to them. To represent not only Beacon, but themselves and their teams. To prove their strength to everyone, and to showcase the talents of a true hunter or huntress.

END_OF_DOCUMENT_TOKEN_TO_BE_REPLACED

[This riff – A whirlwind tour of Bats’ Issues™! Things get a little real for me in this one. The author lays off from the next one on, so if my whining annoys you, you won’t have to put up with it next week.]

Hello once again, patrons! I’m your host, BatJamags, and I’m back with…

Fuck, I made it to this one. Yeah, I’ll get to why I hate this fic in particular soon.

Right, so I found this fic while in the midst of binge-watching RWBY. This fandom’s never been properly infodumped on here, so I’m going to power through this quickly. If you haven’t seen the show, I highly recommend giving it a watch. The first season is pretty clunky in writing, acting, and animation, but it all steadily improves over time and is never outright bad even to begin with.

Alright, the voice acting in the Black and Yellow trailers was pretty damn awful, but I promise they get better! Except Adam Taurus. He still sounds like a tryhardy moron. Fitting, because he is a tryhardy moron.

END_OF_DOCUMENT_TOKEN_TO_BE_REPLACED

Hello once again, patrons! I’m your host, BatJamags, and I’d like to warn you that what you’re about to see may, in fact, be 2spooky4u.

There is a fifth dimension, beyond that which is known to Man. It is a dimension as vast as the author’s note to My Inner Life, and as timesquiggly as My Immortal. It is the middle ground between light and Edgelord, between thermal radiation and BLUE; and it lies between the pit of a riffer’s fears and the summit of his anger. This is the dimension of bad horror oneshots. It is an area which we call… the Badfic Zone.

Respectfully submitted for your derision: a classic horror film, given ending fatigue it didn’t need. A secondary character is confronted by his fears, and an accidental OTP. Not much of importance ensues.

END_OF_DOCUMENT_TOKEN_TO_BE_REPLACED

2147: Sly Cooper: Thief Of Virtue — Pages 374 Through Epilogues (Yes There Are Multiple Epilogues)

Last time we were treated to a vision (what else!) showing a young Lil Yachty Hookworm and his creepy be-fedora’d nutcase of a dad giving him a medallion with the Magical Mystery Crystals in it as a birthday present and subsequently running afoul of a rather pudgy, ill-defined Clockwerk. Clockwerk wanted to know where Dad Cooper was and Dad Lupus wouldn’t tell him, so Clockwerk killed Dad Lupus in front of his son and then Dad Cooper tried to adopt him but was also killed. Q-Tip Henipavirus then grew up and chased after Clockwerk himself, but discovered the bird was already dead, and in a fit of Edge over having had his kill stolen chucked his medallion into the lava of Clockwerk’s volcano and caused the Magical Mystery Crystals to somehow transmute into their current giant forms. Except he also says he doesn’t care about the whole kill-stealing thing and just wants to take over the world. So there was no point to any of that.

Back in the present Interpol was gearing up for a full-scale assault on Future Oesophagostomum’s castle, using the green Magical Mystery Crystal as bait. Fox Obnoxious, however, showed up and deliberately got himself captured, then used the crystal to mind-control Director Torus into making vague threats and recorded him doing so. Travis Scott Xuan Son Virus then showed up in person to recover the recording (which he believes will somehow cause the entire geopolitical order to collapse if released) and straight-up kill a bunch of Torus’s men. Torus and Ice Ice Baby then gave chase in a helicopter.

Also a character named “Sly Cooper” may occasionally have appeared and taken a peripheral role in observing the above happenings, but he wasn’t particularly important. We left off just as he was preparing for some sort of ‘final showdown’ with iSpy Cysticercosis.