Hello everybody, and welcome back to Harry Potter and the North Korean Propaganda Machine. My name is Herr Wozzeck, and I’m here with yet another installment of “OH DEAR GOD WHY!?”

Because really, what else can you say to this? The level that someone wants to go with their edgy brand of “humor” is really kind of shocking, you know what I’m saying? And for me, I don’t understand just what the hell this person was thinking.

Which means we’re gonna dive in deeper! Hang on to your hats, ladies and gentlemen, we’re going in!

END_OF_DOCUMENT_TOKEN_TO_BE_REPLACED

Hello everybody, and welcome back for some more Harry Potter and the Bolshevyk Revolution. I’m your host Herr Wozzeck, and today, I guess it’s time for more adventures in “communism”.

More than anything, I just know that the quest against McGonagall is just not gonna end well for anybody. I mean, when it misunderstands what “cultural appropriation” is supposed to be, accuses her of doing it when it’s not what she’s doing at all, and then centers a whole plot thread around it… Good Lord, ladies and gents, I don’t even have the words.

So let’s just dive right in. I just cannot wait to see what happens! END_OF_DOCUMENT_TOKEN_TO_BE_REPLACED

Hello ladies and gentlemen, and welcome to the Library of the Damned. And this time, well…

*puts on the hardhat*

Why, oh why, did this trollfic have to go into Communism? I just…

Let’s just get started. I’m expecting this to go way more horribly wrong very soon, and dear Christ, the number of chapters! So the sooner we’re done with this, the better.

So here we go. END_OF_DOCUMENT_TOKEN_TO_BE_REPLACED

WARNING: This fancomic (and, by nature, the snark) contains discussion of abortion-related issues. Because of how the fancomic handles the topic in question, those who are sensitive to such a topic may wish to skip this snarking entirely.

Hey children! Guess what? ‘Tis I, the great and glorious Herr Wozzeck!

And I have returned!

Yes, ladies and gentlemen, the snark bug has finally hit in proper force again, and I’m back in the thick of it! It’s a little bit like the Nostalgia Critic actually: we both hit a bump, felt we couldn’t go further, and then we found something so grotesque, so bad, so stupid, that it reinvigorated the snark bug!

Ladies and gentlemen, it’s time to delve into a Zootopia fancomic! But not just any Zootopia fan comic! No no no no no. If it had to be a Zootopia fancomic, it’s a matter of going big or going home. Lucky for me that this particular webcomic has spawned countless memes on Twitter, then! (No, seriously, there’s an entire article from Dorkly about it.)

So, let’s get into this, shall we? Beware, for we’re about to trudge into the infamy that is I Will Survive.

END_OF_DOCUMENT_TOKEN_TO_BE_REPLACED

1707: Parties are for flirting – Oneshot

I’m here with a little oneshot I stumbled across in the Monsters, Inc. section that bills itself as a Romance/Fantasy fic – and it’s a Reader fic! You know how fun those are.

As a special treat Syl is making book in the North Atrium; you can bet on which of your beloved childhood characters you, the reader, will soon be making out with! Or even which canon character will be making out with another character, if that’s more your thing. Because if you’re going to be emotionally scarred by a fic you might as well get some cash out of it.

Now for those of you who aren’t familiar with the Monsters, Inc movies – welcome to Earth! Please do not eat my brain or cats.

But just in case you’re not an alien, here’s the very short version; Monsters, Inc tells the story of a parallel world of monsters that is in many respects a mirror of the human world. The monsters have discovered a way to use closet doors as portals to travel to the human world, where they frighten children in order to harvest their screams for energy. This is considered incredibly dangerous, because children are seen as exceptionally toxic and supposedly can kill with a single touch. Of course a little girl ( called Boo, which is the only thing she can say) manages to cross over into the monster world, where she meets Sully (James P. Sullivan) and his friend Mike Wazowski. 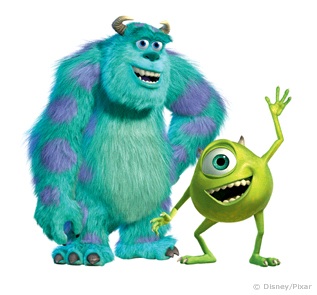 This is Sully and Mike. Do not picture them making out with each other.

Hijinks ensue and the guys discover that humans aren’t toxic but instead taste just like chicken! (No, not really; there’s a bit about how laughter is more powerful than screams, or something.) Way too many years later there was a prequel released, Monsters University, that details how Sully and Mike first met while in Scare School, which is an expy for the human college experience.