Hello, dear Patrons, and welcome to more … whatever this trainwreck is.

In the last chapter there was a confrontation between Jack and Aku, until Aku got bored and wandered off. Then some other stuff happened, but no one really cares about that because it probably isn’t important.

Also, the Big Book of Ponderations for Sleepless Nights is still here, hovering in the corner, and a cluster of raccoons has built a shrine that mostly looks to be made of tin foil and apple cores around it. Not sure where the raccoons came from, but I’ve learned not to question things too closely.

Is it really that hard to find a near-omnipotent shape-shifting demon who rules the entire universe?

Jack was awaiting the next night when he was doing his best during the day to try to hunt for Aku.

From inside the pizza restaurant, where he’s locked up until the five nights have passed. All Aku would have to do to get away is just … Leave.

It’s almost as if this fic is designed to suck all the dramatic tension out of itself.

END_OF_DOCUMENT_TOKEN_TO_BE_REPLACED

Zeus: Welcome to yet another part of the TFA riff, where we examine just how deep the rabbit hole goes.

Svarti: In the last two riffs, Ash became an even bigger Sue, we had a sex scene for 1/4 of a chapter, and the rest was spent glorifying this massive dick with a murder spree.

Ramirez: And in other news, chapter 9 is actually an authors note asking for help. Normally we’d skip it…

Judger: But we’ll let it speak for itself.

END_OF_DOCUMENT_TOKEN_TO_BE_REPLACED

“When you reach my age, you will learn the importance of napping.”

Dude, a week is closer to a coma.

“When you reach my age, you will learn the importance of limited duration comas.”

Whatever, what happened last week?

“Discussion, reiteration, bathing,” *Crunchy picks up a piece of paper which was left on the desk* “and apparently ‘the girls’ were placed in confinement.”

Fabulous, let’s finish this chapter off.  It’s the second-to-last interlude chapter, so hopefully we’ll only have to suffer through this level of meandering pointlessness one more time.

“The typical level of meandering pointlessness will remain, yes?”

Sadly, this is true.

END_OF_DOCUMENT_TOKEN_TO_BE_REPLACED

Hello hello all you patrons, and welcome back to Mass Effect: The First War.

Previously, Grand Moff Whyney twirled his mustache some more about destroying Palaven and some turian colonies, and a turian ship that somehow survived the massacre on the borders of the Sol System bombarded Tokyo, and Not-Master-Chief the Not-SPARTAN wandered around and killed some dudez in the rubble, and… that was about it, actually! 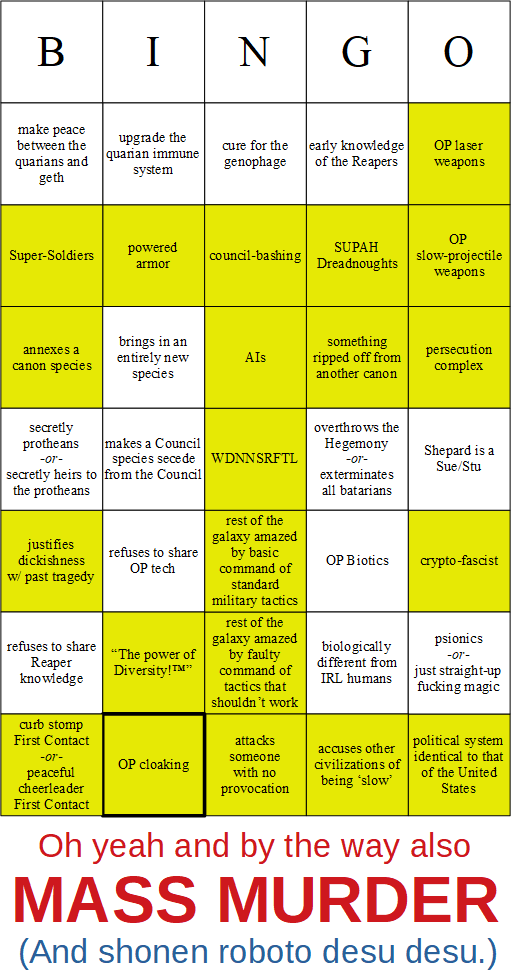 END_OF_DOCUMENT_TOKEN_TO_BE_REPLACED

[And now, a riff that Crazy Minh sent me more than a month ago. Sorry about that. I’ve also taken the liberty of adding a few insights about the X-Men half of the crossover, mostly identifying characters the author doesn’t describe very well and providing wiki links for curious patrons. – Bats]

Hello, dear patrons, and a very Merry Christmas to you all! Welcome to the first break in the monotony that is EclipsePheniox’s ‘Trapped in 40k’. I’m your guest riffer, Crazy Minh, and over there at the tactical console is our special guest, Major Wade!

Sir…do we really have to do this?

Oh no, we do. Now, as I’ve already made clear in my riff of ‘Battlestar Highschoolia’, I am a massive BSG fan. In my humble opinion, Battlestar Galactica (2003) is the best military science-fiction TV show of the early 2000’s. In terms of broader science-fiction greats of the era, it ranks up there with Firefly, Star Trek: Enterprise, and Stargate: Atlantis. It is- for either the better or worse- the progenitor of the recent tsunami of dark, gritty science-fiction television programs that have taken over the genre. But unlike some shows (*cough*Discovery*cough*), it doesn’t take the road into edgelord territory. Well…for the most part, at least. The show was- and still is- extremely popular. I’d highly recommend watching it if you already haven’t. If you have watched it, watch it again!

With that popularity comes the obligatory fanfiction. With that fanfiction comes the bizarre crossovers. Thus, we have ‘Battlestar Prometheus’, a crossover with X-Men, which is 90% blatant plot-regurgitation, and 10% plain wrong. Let us begin:

END_OF_DOCUMENT_TOKEN_TO_BE_REPLACED

Hello once again, patrons! I’m your guest host, BatJamags, and we’re back with more of D&D Tag Along, the fic that’s bringing you thrilling Kobold-fighting action!

Kane: Where did I go wrong in life?

Last time, Hockey Stu and Stalky Sue bullshitted (Bullshat? Bullshot?) around for a little while before setting off on the road, Hockey Stu was whiny, some Kobolds attacked with a nonsensically-applied Sleep spell (which was quite possibly running on game mechanics), and then our heroes just kind of shrugged their shoulders about it and moved on.

Oh, wow, look what didn’t stop being the name of the fic.

Kane: If I had an inn, I would name it The Black Pits of Madness.

END_OF_DOCUMENT_TOKEN_TO_BE_REPLACED

*SC peeks warily in the door, then sighs heavily upon seeing multiple suspended pieces of furniture and two biotics – one an Alliance soldier, who is visibly exhausted and trembling from the exertion, the other an Asari Spectre who seems only mildly winded – poised to hurl said furniture at one another the instant one twitches wrong; by the rampant chaos in the room, this fight has been going on for some time*

Stop destroying my riffing chamber. It’s been Halloween, Thanksgiving, Christmas and New Years since I left you two to sort your shit out.

Specialist Mathers: I don’t think you truly appreciate how much patience these Asari bitches have when it comes to one-on-one biotic duels. Boy, am I starting to appreciate it…

Spectre Myrai: Oh yeah, sometimes biotic duels on Thessia would go on for entire years if a Matriarch didn’t step in and shut everybody down. It was nuts. Which means you should really just surrender, Mathers, because my victory is all but assured.

Specialist Mathers: If I surrender for any reason, it’s because I’m probably about to faint from overexertion, not because I’m letting you win.

Where the hell are the rest of their crewmates while all this is going on…?